Which bolts are suitable for wind turbines? 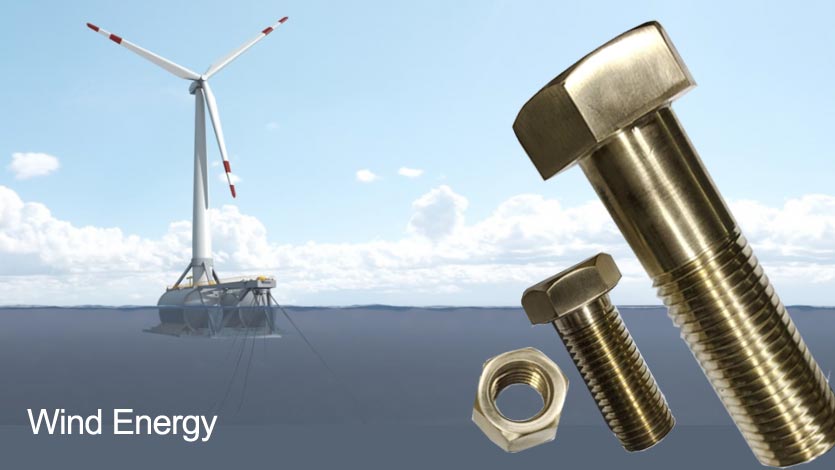 Similar to high fatigue machines like helicopters, the functioning of wind turbines causes the device to vibrate due to the high-speed motor that is a part of the instrument. Hence, this equipment requires machinery that can withstand high vibrations. Moreover, this device captures wind energy, which by itself can apply sufficient load on the machine. There are sturdy materials that are well suited for demanding applications, for instance - the construct of this particular equipment. Consideration is a priority during the selection of these Fasteners. It is because of the fasteners that hold the turbines in place. Several parameters need looking into before considering any variety of Fastener for its use.

Firstly, the appropriate material needs to be selected. Although there are several materials used as fasteners, some of the more important ones include stainless steel grades like alloy 321, 347, or super duplex alloys like SAF 2507. The functioning of a wind turbine often generates heat and is prone to get worn out due to frequent abrasions. High Nickel Alloys like 625, 800, or even grades like C-276 or C22 can withstand elevated temperatures while exhibiting superior wear resistance properties.

The second parameter that one needs to reckon while selecting a bolt is its corrosion resistance properties. While stainless steels or nickel-based alloys have superior tensile properties, they also offer a higher level of resistance to oxidation. Oxidation corrosion is a problem that can occur in some parts of the equipment. Chromium-based steels form a self passivating layer on its surface. This self-passivating layer is what prevents oxidation. The use of surface finishes could increase the corrosion resistance properties of these bolts marginally. Frequently used surface finishes used are hot-dip galvanization, or electroplating the component with zinc. Not forgetting the climate change and sustainability perspective, it is of utmost importance to take into account the life cycle of bolting material as well.

Structural bolts like grade 8.8 or as also referred to as high tensile hex bolts, particularly those produced under specification ASTM A325, which have a minimum tensile strength that ranges between 105 ksi to 120 ksi could also work in the assembly of this machine. Grade 8.8 bolts are highly alloyed and have a thicker and broad head, which aids in the efficient distribution of load or stress. A bolt tightened to at least 70% of their tensile strength offers the optimum stress distribution. Grade 10.9 is similar to the former class 8.8. The use of a bolt which belongs to class 10.9 is well suited for high strength application. Self-locking nuts or locknuts are preferred in such a device, simply because they can resist loosening under vibrations and torque. Anchor bolts are fasteners that find use in applications for forging connections between concrete and structural or non-structural elements. Therefore, the use of an Anchor bolt could include holding the machine in place. A benefit of using anchor bolts is that they can withstand rough weather. Furthermore, anchor bolts exhibit superior resistance to corrosion and hold their own without giving in to loosening during vibrations.

Another type of bolting could include the use of an electrical wrench to a torque bolt. The advantage offered by an electric wrench is because the margin for making an error reduces since the bolt is locked or tightened to a particular torque value. Typically, an electric wrench has an accuracy of +/- 3%. In addition to the accurately tensioned bolt, the stored torque data could ensure that the project works at an optimum level or for tracking and testing.

In addition to the above-mention framework - an important one is the cost of bolting. To sum up, bolts used in wind turbines need to have high tensile strength, withstand shock and vibration, excellent resistance to oxidation, while proving to be a cost-effective solution.

© 2020 All Rights Reserved by Jignesh Steel